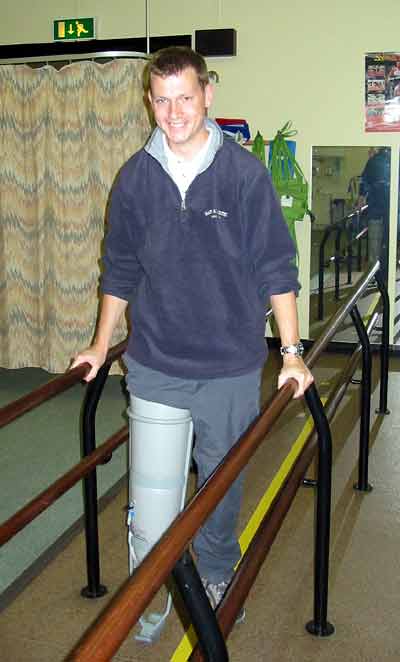 We're talking, via phone, to Stu Hughes of the BBC from the UK. He created a blog before he left for Iraq as a way for him to communicate his experience with friends and family. He was in a land mine accident and now is recovering from surgery where part of his leg and his foot were amputated. . His blog talks about the experience and his steps (literally) to recovery. Xeni Jardin is interviewing him and doing an excellent job. Very touching story, but interesting from the standpoint of Stu using his blog to reach out to others, explore his new situation, and, I suspect, get a little therapy. He says something that is very true: you write for yourself and if someone else gets something out of it, then that's good too. You have to have that perspective if you want to keep blogging. Sometimes there's not much feedback.

Doc Searles commented about the community surrounding warblogs and the fact that there are two or three stars who are at the center of that community. I think that's an interesting idea. These people seem to have to exist in these communities. Doc says that he's chosen not to be political in his blog. I agree. I have tried to stay away from that as well. Part of my reason is that to do it justice, I'd have to spend much more time at the political stuff than I'm willing to do right now. Otherwise, you say some stupid things and you just get into trouble---people get very passionate about these things.

Stu is discussing being scared when he realized his blog was getting a lot of attention. He was scared because he hadn't thought about how public it was and wasn't sure he'd been as careful as he should have with what he said and scared that when his employer found out, they'd ask him to shut it down as he hasn't gotten permission first since he saw it as a personal way to communicate with his family.