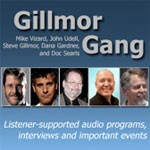 I like the new Gillmor Gang. Its very unlike most things you hear--presentations or interviews. Listening to the Gillmor Gang is more like being a fly on the wall at a lunch with these guys. I know because I've been at lunch with many of these guys and this is just what it's like. The problem is that I always want to jump into the podcast conversation. In fact, I once did and that led to my first podcast.

The format of the Gillmor Gang is a little different. Steve and Gang record a show that is probably about 90 minutes long before production. Steve (or someone) then splits it up into multiple sessions and adds intros, music, ads, and so on. So each week, you might get 3 or 4 sessions of that week's show. You may want to start with the first and work your way forward in your playlist, but the sessions tend to be pretty self-contained, so listening to just one is generally OK. If you subscribe and just start listening, you'll get the hang of it soon enough.

This last week, Steve labeled the show "The Trust Gang." Steve provides very little in the way of show notes on the landing pages, so you'll just have to listen to things to see what's in them. I'll give you a 25 cent tour of the Trust Gang shows.

Trust Gang I has a great discussion of virtualization that grew out of the observation that Linux World was pretty dead and Xen was the only thing happening. One of the discussions on virtualization was that server companies might be dragging their heals on the virtualization front because it ultimately cuts the overall number of servers that they'll sell.

While there's some truth to that, I've noticed that Dell and HP push it pretty hard. As Mike Vizard points out, there's an uptake of the hardware costs in the software side. In the research we've done in my lab, we've discovered that virtualization helps take advantage of multiple cores and even hyperthreading. Those hardware designs are fertile ground for virtualization, so I think server companies will eventually push virtualization as a way of utilizing all the power in the sophisticated chips that are starting to populate servers.

Dan Farber also mentions, as an aside, the ZDNet Whiteboard discussions in Trust Gang I. if you're not familiar with these, you ought to go take a look. These are short videos with ZDNet experts at a whiteboard explaining some concept. Very useful.

Trust Gang II has an interesting debate among the gang about disclosure and how it differs (or not, depending on who you believe) from transparency. I'd hate to try to characterize positions here, but when you listen, remember that Dan's right. :-)

That discussion led to a conversation about privacy in Trust Gang III. Is privacy dead? Steve and some other members of the Gang seem to think so. I'm inclined to agree. As part of the research I'm doing for a possible next book, I ordered and read some books on how to disappear (see, for example How to Be Invisible by J. J. Luna).

It's amazing, when you think about it, how connected we are all to a collective network of information. Disconnecting yourself, even in little ways, from this network is very inconvenient. As an example, one of the first things that everyone in this field recommends is to stop getting your mail at home, stop sending mail from home, and then move. Yeah, move.

After you move you can never tell anyone (with a few exceptions) your real address again. This extends, for example, to only calling 911 from a cell phone so your real address isn't connected to your emergency call. Would you be willing to trust that your kids can remember to call from a cell phone in an emergency, lie to whoever takes the call and whoever shows up about why this isn't really where you live, and then move (again) if they messed up? That's only part of the inconvenience it takes to secure real privacy. Most of us aren't willing to even take small steps.

One of the points made on the show is that selective privacy is much more dangerous than no privacy. Amen. This harkens back to David Brin's Transparent Society.

In Trust Gang IV, Seth Goldstien finally gets a chance to talk about Attention Trust and Root Vault. Good overview. You might also start to understand what Steve means by "gestures" if you listen to this and the previous episodes closely and read between the lines.