I was browsing the ZDNet blogs this morning and saw this ad: 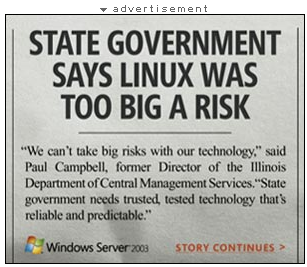 This caught my eye and I clicked through. The ad takes you to case studies from Microsoft, including one showcasing the State of Illinois' email consolidation project. Utah did something similar back in 2002. Believe me, it's not an easy job.

As you'd expect since it was a Microsoft case study, Illinois chose to consolidate an Exchange/Active Directory solution--they had different agencies using Exchange, GroupWise, and Notes. We were luckier--almost everyone was usin GroupWise and Novell directory--although there were lots of servers with out of date versions that had to be updated before we could install a meta-directory.

I wouldn't fault any CIO for choosing Exchange. It's the dominant email platform at this point and clearly the safe choice. What I do find a little interesting is that Illinois officials would go out of their way to help Microsoft create an anti-open source propaganda video. The two stars are Paul Campbell, Director of CMS (Central Management Services) and Tony Daniels, the agency's Deputy Director. At one point, Daniels says:

"People say that open source doesn't lock you into any one company, but when you think about it, it locks you into uncertainty."

Daniels also says something about not having time for "science projects." Did Microsoft write the script? Sadly, probably not. That's probably what he really believes. When I became CIO for Utah, I found a culture that was ignorant and, in some cases, scared of open source. That's probably not just true of state government, but any old-line business.