I didn't grow up in an era where testing was as well though of as it is now. When I learned to program, you ran a few tests after the fact and threw it over the wall to the QA department. Not very politically correct in today's software engineering world.

As a result, I understand the value of testing and support the idea intellectually, but I don't have the discipline.

Recently I was faced with the problem of building code that translated a domain specific language (KRL) back and forth between three different representations: 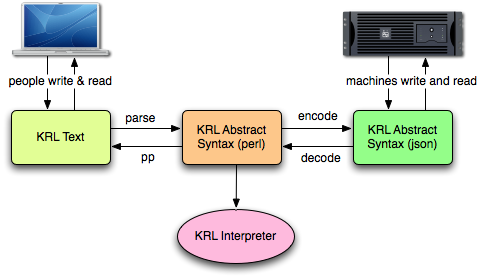 I quickly realized that getting this right--and convincing myself of that--would require something more than some ad hoc testing. So, I decided to mechanize.

I knew that Perl had testing facilities--anyone who's built a library has seen that. So, I had to figure out how they worked. I found these resources handy:

Here's what I did:

I also added test scripts for each module in the system as well as a few scripts to check for developer issues--thanks to petdance (PDF).

I also wrote a use.t script that goes through the entire collection of Perl modules and programs, gathers a unique list of every library they use, and then checks for availability on the current machine.

Now, I can flesh out this framework with other tests as they come to me or I run into problems. It feels good.