Tweeting from KBlog: An Experiment in Loose Coupling

Last week I posted about creating a blog using KRL as an example of an application that used multiple rulesets and has a more complicated event hierarchy than typical KRL applications. I followed that up with a post about making the back button work in the resulting blog as an example of using external JavaScript libraries and emitting raw JavaScript from rules. We even added a new event type (web:hash_change) using JavaScript. You can see the resulting blog here.

If you're familiar with hooks in programming languages, then you're part-way to understanding this. I'm most familiar with them from Emacs Lisp. Hooks provide places for intercepting control flow in the program. For example, when you load a major mode in Emacs Lisp, there is a hook that will call a user-provided function, allowing the mode to be configured and customized. Hooks usually cause functions to execute. Events, on the other hand, provide a level of indirection so that what runs can be dynamically determined.

To put this into action in KRL, I expanded the blog application by layering on functionality that gave the author the option of automatically tweeting the blog post. If you recall from the previous design, when the form is submitted, a rule, handle_submit raises the event new_article_available. We can post the content of the post to Twitter by listening for that event and doing what's necessary to format and send the information to Twitter:

The rule send_tweet listens for the new_article_available event and uses the built-in KRL Twitter module to check the keys (stored in the key pragma of the meta section of the ruleset) and update the associated Twitter stream. This was pretty easy to put into place because the event was already being raised.

The next step--making tweeting the post optional--however, revealed the mistakes of my earlier design that got in the way of modifying it by simple adding new rules rather than modifying the original rules.

Making Twitter update optional requires us to give the author the option of tweeting or not. Adding a checkbox to the form give the author this option and is relatively easy if an event reveals when the form is there. In my original design, the place_form rule was a terminal in the event hierarchy, meaning that it raised no events. Without an event, there's nothing that the rule adding the checkbox can watch for. So, I modified the place_form rule to raise the explicit event post_form_ready. Now the place_checkbox rule can listen for that event and add a checkbox to the form:

This adds a checkbox to the form without modifying the original ruleset (besides the fix to raise the event). Other changes to the form for other features could also be added. The form now becomes a canvas that rules can paint as they modify the functionality of the underlying application. 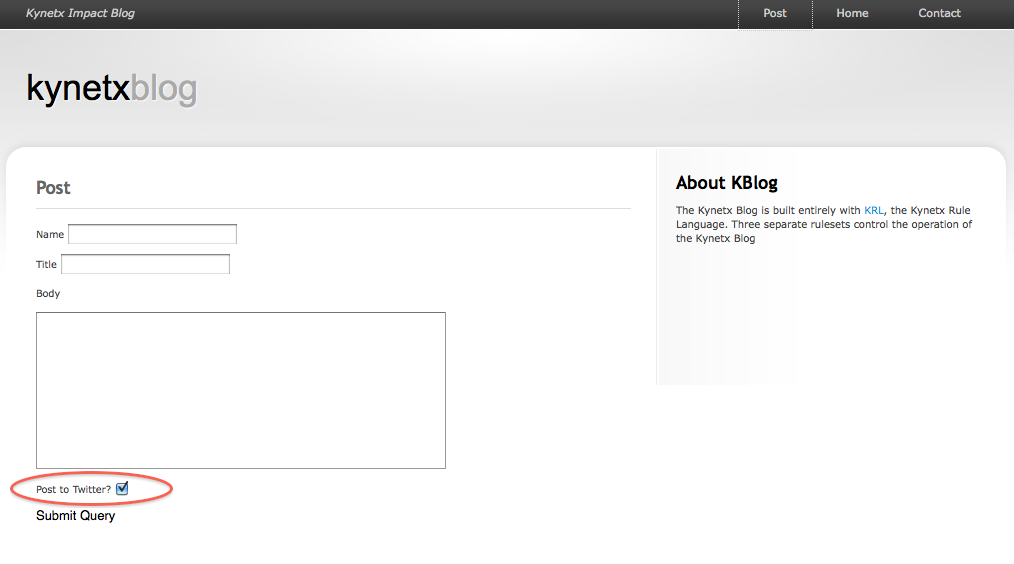 There's just one more tiny problem. The handle_submit rule raises the new_article_available event, but it places the form values in individual parameters. In other words, it's tightly coupled to the original structure of the form and thus won't pass on the value of the checkbox so that we can test it in the rule conditional. The answer is to be less specific in the form parameters we pass with the event. Here's the new handle_submit:

Notice that where before, the explicit event had a separate parameter for each form element, this version just passes all of the parameters onto any listening rules. Now send_tweet can pick out what it needs:

This rule is largely the same except that it has to pick the author and title out of the post parameters. The rule condition has been changes to check the value of the tweet parameter in the form. A bit of explanation: the second, true argument to pick causes it to always return an array. We check it's length since a checkbox doesn't return anything if it's not checked and thus we get an empty array out of pick. The length of an empty array is zero, which is interpreted as false in KRL. We don't actually care about it's value if not zero.

Of course, that assumes that original application is written in a way that supports loose coupling. We ran into two problems:

These problems are easy to find and a simple test application showed where they existed. I believe that writing applications as collections of rulesets in such a way that they support extending functionality through accretion in a loosely coupled manner is practical, but it does require some planning and design effort.

The modification to the event hierarchy is fairly modest since only two new rules were added. This reflects the loosely coupled nature of the application. 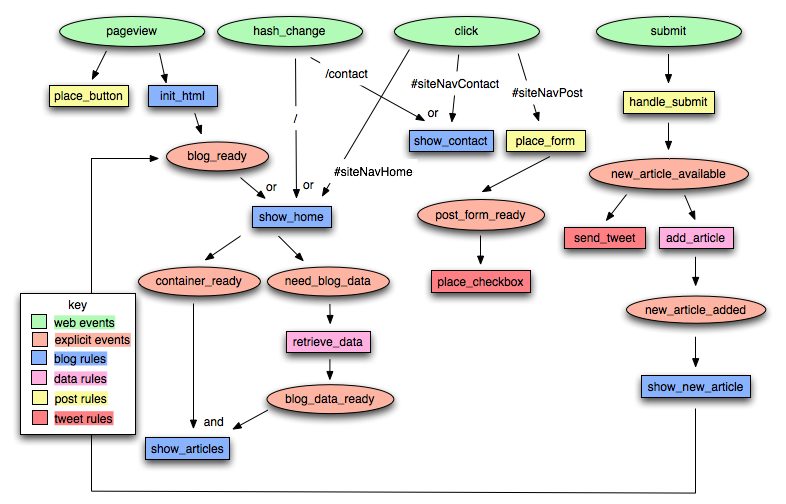 There is a new ruleset for the tweet rules. The place_form rule now raises the post_form_ready event for which the place_checkbox rule is listening. The send_tweet rule listens for the new_article_available event. As they should, the new rules are accretive to the overall event hierarchy, not requiring changes to it, but merely adding to it.