Personal clouds needn't be complex to set up or manage for them to have significantly more power than the cloud appliances that companies offer people today. We envision systems that are no more complicated than a smartphone that offer the features and benefits described above.

There's no doubt that clouds are big business. A 2011 report from research firm Gartner put worldwide software as a service (SaaS) revenue at $12.1 billion, a 20.7 percent increase from 2010 revenue of $10 billion. The SaaS-based delivery will experience healthy growth through 2015, when worldwide revenue is projected to reach $21.3 billion. SaaS is just one component of the overall cloud services sector which a 2010 Gartner Research report projected to grow to $148.8 billion by 2014.

While much of the growth in cloud computing is in the enterprise space—especially infrastructure and platform plays like Amazon and Rackspace—there is significant activity in the area of personal cloud computing. Point solutions like Dropbox along with more holistic offerings like Apple's iCloud and Google's suite of products are all part of the personal cloud space.

Through their personal cloud offerings, companies like Apple, Google, and Facebook vie for the attention of Internet users. Apple is slightly different than the other two since their users are their customers. Apple uses their cloud offering as a way to make your Apple devices more useful. On the other hand, Facebook and Google are literally after your attention because user attention is what ad-supported companies sell to their customers, the ad buyers. While offerings in the personal cloud space provide real utility for users, they are limited in several important ways.

First, each of these offerings is an appliance. In other words, they provide specific functionality with only limited features. Think, for example, of the difference between a DVD player and a tablet computer. The DVD player is certainly a computer, but it's a computer with a specific function—an appliance. In contrast the tablet is nearly infinitely extensible and will take on different capabilities as its owner updates it, installs apps, configures it, and links it with other services.

Second, these personal cloud offerings are silos, standing alone and apart with only limited interconnectivity. Users might be able to export documents or import calendars, but users do not have unfettered access and use of their data. Interactivity is implemented on an "as the market demands" basis rather than according to the user's individual needs.

We contrast the current view of personal clouds with one where personal clouds are the successor to the personal computer. In the personal-cloud-as-personal-computer model, owners of a cloud control it in the same way they control their computer. They decide what apps to install, what services to engage, and how and where the data is stored.

For a better understanding of why this is desirable and leads to increased opportunity and power, we need to explore how we interact online today and how we could do it differently. In original conception, the Internet was a network of peers where each spoke TCP/IP and had an IP address. (Aside: I know I'm stretching things slightly here and ignoring the idea that the Internet was a network of networks with TCP being only one of many transport protocols. But that was more of a political sop that helped gain acceptance of IP than anything real.) Of course, now most things "on the net" have non-routable NAT'd addresses. The world would be much different if the original architecture had persisted.

The result of this shift is a split between "servers" where the real work is done and "clients" that are dependent on servers. Doc Searls has labeled this the cow-calf model. 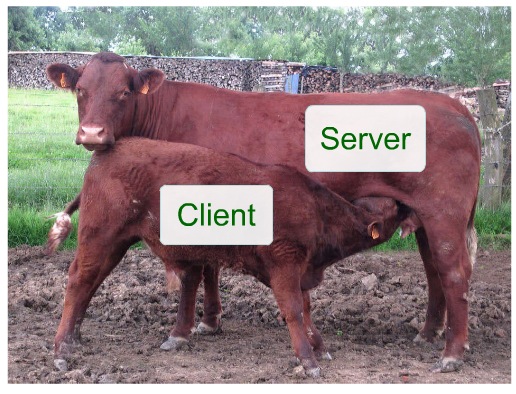 He and David Wienberger wrote about this eloquently in 2003 in an essay entitled World of Ends. In that essay, they say:

When Craig Burton describes the Net's stupid architecture as a hollow sphere comprised entirely of ends, he's painting a picture that gets at what's most remarkable about the Internet's architecture: Take the value out of the center and you enable an insane flowering of value among the connected end points. Because, of course, when every end is connected, each to each and each to all, the ends aren't endpoints at all.

And what do we ends do? Anything that can be done by anyone who wants to move bits around.

Email is a good example of this principle at work. Email is delivered on the 'Net using the SMTP protocol. I have an email server that runs in the cloud that understands SMTP. It functions as my "end" for email online. What's better, I didn't have to stand up a Linux box and install Sendmail to get it. Google runs it for me and I just use it: email-as-a-cloud-service.

You might be thinking that this is a tall order. But that's how big this really is. I think there are good arguments why many of the futures we're expecting are best supported—maybe can only be supported—by personally controlled, general purpose computers that operate in the clouds. Let's take them in turn.

Change how we relate to everything in our lives—As more and more products and services go online, our capacity to control them and interact with them will depend on the compute power we can bring to bear on the problem. The current model is to turn the device into a server and build an iPhone app as it's client. For example, this is how the Nest thrmostat works. That works great when there's only a few or until you want two of these products to start interacting with each other. The future will require any-to-any interactions that can't be supported by special purpose apps on a smartphone. Applications running in the cloud, however, can use protocols to mediate the interaction in a more general way.

Rearrange how we buy and sell products and services—For new conceptions of online commerce like VRM to work, people need independent, autonomous agents who will represent them in transactions. The only viable place I can imagine these agents operating is in some kind of personal cloud.

Revolutionize how we communicate with each other—Giving people customizable, computationally complete ends on the Internet also provides us with more flexible means of interacting with each other and the services we use. A personal cloud can have an infinite number of incoming and outgoing "channels" for communication, meaning that you can dedicate one or more channels to anyone or anything. Independent channels have three important properties:

Personal clouds needn't be complex to set up or manage for them to have significantly more power than the cloud appliances that companies offer people today. We envision systems that are no more complicated than a smartphone that offer the features and benefits described above. Indeed, such systems exist today.