Government has a monopoly on violence. Consequently, it tempts everyone, whether Republican or Democrat, to take short cuts and force others to buy into their vision (literally, through taxes). We must strongly guard against this temptation for society to prosper. 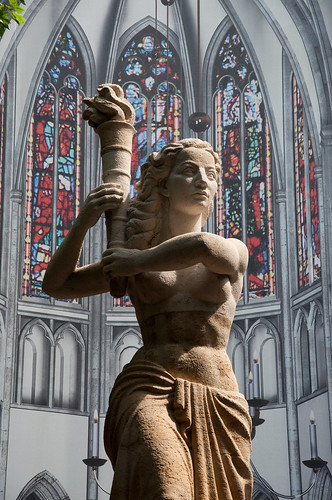 Republicans accuse Democrats of bankrupting the country on their way to socializing America and destroying the very freedoms upon which the country was founded. At the same time, Democrats paint Republicans as heartless bastards out to dismantle every social safety net in pursuit of ever larger tax breaks for the wealthy. I, for one, don't believe either argument.

Rather I believe that people on both sides, deep down, are trying to build the best future they can conceive, but they're coming at it with very different conceptions of "freedom." Both sides of the argument have a firm basis for their fundamental beliefs that has nothing to do with being heartless or a socialist. Let me explain.

(Note: I'm not saying there aren't people on both sides manipulating the entire situation. But talking about them isn't the purpose of this post. I try to ignore them. I think the greatest danger we face is when sincere people on either side get caught up in the rhetoric and lose site of their real goal to focus on "winning" an argument at any cost.)

There are three basic kinds of freedom (greatly simplifying here):

In modern society it is very difficult to be completely independent. All of us are increasingly interdependent as we become evermore specialized in our education, skills, and trades. This is the root of the nasty arguments about Pres. Obama's "you didn't build that" speech. Both sides, of course, are right as far as it goes. No one builds anything in a vacuum, but anyone who's created a business knows that it does require very hard work and at the same time offers more independence than simply "working for the man."

So let's stipulate that independence isn't really what Republicans and Democrats are fighting over. While there are various degrees of independence, that's not anything government can provide and not what I think we're talking about when we say "freedom" in a political debate. It might be desirable but it is increasingly impossible to achieve.

The debate comes down to this: Republicans are driven by "freedom from" while Democrats are passionate about "freedom within." Look at the arguments and I think you'll come to the same conclusion. While both talk about freedom, they're talking about different kinds of freedom and thus largely talking past each other. Whether you're Republican or Democrat largely comes down to whether you think Government's job is to provide "freedom from" (hence the historical emphasis on crime and defense) or "freedom within" (hence the historic emphasis on social programs).

"Freedom from" and "freedom within" are not necessarily in conflict until the government gets involved. In the example with my children and school they have freedom from restraints and my support at the same time. At the same time, my freedom is intact since I support them voluntarily.

You might think that their "freedom within" is at the mercy of my willingness to offer support and guidance. That is true insofar as they have no other means of getting support or guidance (which is not true). My support and guidance is more convenient for them than other sources and comes with the added bonus that it is borne of love and compassion, making it that much more aligned with their interests.

What's this have to do with violence? Simply this: every act of the state1 is conducted under threat of violence. The whole idea of government is to create a monopoly on violence. The state is very jealous of that monopoly. In a democracy, government wields that violence at the behest of the majority to accomplish societal goals. The genius of the Bill of Rights is that it defines areas where the majority may not use violence to further its aims at the expense of the minority. All other curbs on the use of violence by the state are merely conventions that can be changed by the next legislature.

You might object to my use of the word "violence." Violence is defined as "behavior involving physical force intended to hurt, damage, or kill someone or something." Imagine that the state gives my child a grant to attend college (which they did, in the interest of full disclosure). You paid for that, at least in part. Not out of altruism or compassion, but because if you do not pay your taxes the state will threaten you with imprisonment. Provided you acquiesce, it will remain just a threat. But resist and the threat will be carried out. This is violence. And every single thing that the state does, from imprisoning murderers to providing free vaccinations to toddlers is made possible by the state's monopoly on it.

Usually, we skirt around this issue in polite society. We don't like to think of the good that is done by government programs as being the fruit of something so loathsome. But in the end, it is. We cannot get away from it. This thread on violence underpins much of my political philosophy. I worry about the freedoms that will be taken from some when we attempt to provide opportunity for others.

Democracies have a hard time keeping government spending in check because the violence of the state is hidden in a velvet glove of societal benefit. This is why classic conservatives have a problem with providing "freedom within" the framework of some new government program. Government programs to provide opportunity to one group (e.g."freedom within") must necessarily take something (e.g. "freedom from") from another. When the government is involved we provide more opportunity to some only by further restricting the freedom of others (usually by imposing taxes).

Because the state has a monopoly on violence and can consequently force people to comply with rules and regulations, it provides a shortcut that is tempting to many—Republican and Democrat. If you don't like something, you can simply pass a law and, as a result, have the threat of violence on your side. Government tempts everyone involved to use violence over persuasion. Believe me, I've been there and it's a heady potion. No wonder we hate bureaucrats (except, of course, when they're on our side). Whenever you hear someone say "there ought to be a law..." substitute "we should use violence to..." and see if you still agree.

"Freedom from" and "freedom within" are only mutually exclusive when we assume that the only way to provide opportunity, to succor the sick, and to raise up the poor is through government. Because government provides a way to force people to help, whether they like it not, many see it as the only way to solve the problem. But, of course, it's not. People and organizations not associated with the government are capable of, and perhaps better at helping the disadvantaged and providing opportunity. Anytime we take shortcuts, we're likely to miss the cues that will lead us to better, more efficient ways to do something. When we force rather than persuade, we miss the knowledge and experience that discussion provides. When we throw invective at each other, we fail to build the consensus that is crucial to our future.

I'm not advocating anarchy, although I do find many of it's tenets intellectually interesting. And I'm not a libertarian. I consider myself a classic conservative. I don't have a touchstone for knowing where we should draw the line. I'm not sure a free market approach to city water would work, for example. There are some societal ventures that simply need everyone's participation. There are classic arguments, for example about why defense is a necessary and proper function of the state.

I think we need more than vague promises of "everyone will be better off." People often say "you can't do experiments in economics" and the same is true of government. That's why I favor smaller steps over large, grandiose programs. I believe that when we fail to guard against the temptation of quick wins for some through government violence, we risk a society that is headed toward failure.

Unfortunately, the political climate of the day has left us largely unable to have fruitful discussions or trust that we can take small steps without risking future gains. Twitter, in my opinion, has made this worse because its a perfect platform for partisans to speak in their echo chamber. I'll have more about this issue after the election.

1. Note that I'm using the term "state" in the general sense to refer to any government.