A Programming Model for the CloudOS

The CloudOS and the persistent data objects it runs on depend on a specific programming model. KRL is the only programming language that supports that model right now. This blog post discusses how we could expand the underlying rules engine to support running JavaScript programs on the CloudOS. 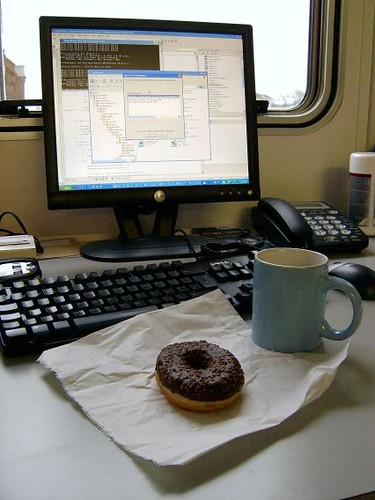 In Programming the Cloud With Persistent Data Objects, I describe why I think KRL is a great language for building persistent data objects (PDOs). What didn't come through in that post strongly enough is that it isn't KRL that's special, rather it's the programming model that KRL supports. In other words, you could write programs for the CloudOS with other languages provided they support the key ideas of the programming model. This post lays out ideas and design for using Javascript, but other languages would work as well.

Before we discuss how Javascript could be used to create programs for the CloudOS, let's review the programming model for the CloudOS. In the post mentioned above, I wrote about the three important features that KRL has that support the CloudOS programming model that gives rise to event-based PDOs. I've modified this slightly from what appeared in the preceding post so as to better focus on the model instead of the language:

I happen to believe that the programming model described above is important for any system that supports the notion of personal clouds. Whether it's built in KRL or on Kynetx technology, I think this architecture has significant benefits that include supporting privacy by design, providing a locus of control for the user, and being particularly attuned to creating large decentralized networks that model real-world situations with greater fidelity.

That said, I don't think that KRL, as a language, is necessary to support the programming model. Let's explore how we might be able to support the features from the last section in JavaScript.

Now for some specific ideas around supporting the KRL programming model in JavaScript:

Entity Orientation - We can accomplish entity orientation for JavaScript at the system level by providing a framework for JavaScript programs such that they always execute in an environment that identifies a specific entity. The KRE (Kynetx Rule Engine) could do this. In addition, we would require libraries that support specific entity-specific features (see below for examples).

While we could redo the entire expression system for JavaScript, I think that we could incorporate KRL's event expression language inside JavaScript. The simplest way would be to create an array of maps like so (we'll use KOBJ as a namespace in this and the following examples):

Persistent Data Values - Every JavaScript function selected by the event system will need to run in an environment where the entity's persistent variables are defined. One possible solution would be to place those in a KOBJ object that is available to the JavaScript. For example the following example would add 3 to the value in the entity variable y and assign the value to x:

System Libraries - Some of system libraries that should be supported for consistency. Some system libraries are required. For example, writing programs for the CloudOS frequently requires access to meta information. Another example is the event.

Raising Events - More important than system libraries is the need for programs in the CloudOS to raise events. This could be accommodated by a raise function in the KOBJ object:

This would raise the event explicit:watch with attributes time and rid.

Actions - Finally, rules bind events to actions. Consequently, we'll want our JavaScript programs to take action. Sometimes, that action is simply raising another event as we discussed above. Usually the action is context specific. KRL provides a set of pre-defined actions that could be made available as functions in the KOBJ object. KRL also provides the means of defining new actions. This could be accommodated using JavaScript functions that follow a specific pattern similar to user-defined actions in KRL.

While what I've outlined above is just one way we might accommodate JavaScript in KRE, it illustrates that it is possible for JavaScript to support the programming model of the CloudOS. What is also, clear is that programming JavaScript for the CloudOS would feel similar to writing a Node.js application, albeit in the specific environment of the CloudOS

When a event is received by KRE, there are four steps required to complete the evaluation of any applicable rules:

Here's a picture showing both KRL and JavaScript evaluators:

Obviously, we could add evaluators for as many languages as we like. Ideally the evaluators would be easily plugged-in and configured.

I would love to support JavaScript programs in the CloudOS. There is still significant design work to complete to make this really usable, but there isn't anything technical standing in the way of getting it done. The largest impediment at this point is resources. Since KRE is open source, I'd be open to working with a group of people who are interested in making this happen. Or you can wait. We'll get to it eventually.