Build the World You Want to Live In

I gave a talk and then was on a panel at the Silicon Valley edition of the New Digital Economies conference on Wednesday. During the panel, I gave this challenge to the audience: you have an ethical responsibility to build the world you want to live in. 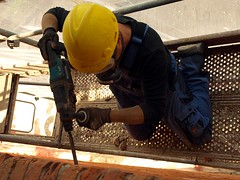 Cisco has made the assertion that there will be 50 billion devices on the Internet by 2020. That number might be high or low as it related to "devices" but I think it seriously underestimates the number of connected things that we'll need to eventually contend with—by several orders of magnitude. The real number is likely in the trillions.

The driver, of course, is Moore's law. John Clippinger reports that an Android phone can be had for $30 in some places. That same connected, computational, sensor platform will cost $3.00 and then $0.30 and then $0.03. When a wireless sensor platform costs $0.03 where will it be? Everywhere. Everything, even disposable things like razors or pens, will be gathering data...about you.

We probably don't really have a choice about whether a $0.03 wireless sensor platform will exist. Technology marches on.

But we do have a choice about how it will be employed. If we follow the path we're on now, all those devices will be controlled by some company somewhere that is providing the service behind them. All that data that all those devices are gathering about you will be streamed back to a walled garden via an encrypted channel to end up as fodder for some big data analytics platform that will be used by someone to sell you more stuff. You will be spied on by everything around you with no rational way to understand where all that data is going and how it's being used. We'll create government regulations that will do little to rationalize your world or help you understand it because they will only succeed in further Balkanizing it.

There is another path: in this alternate world all the devices that are related to you will push their data into a place that you control. This will seem rational and natural because the model will follow the structure of the world you're already used to with clear delineations between public and private spaces and easy-to-understand controls over how data is used and shared. I say "natural" in a literal way. This is the way the physical world works and we're all used to it. In this alternate world you are in control.

There's not much question which of these worlds most of us would want to live in, and yet most companies aren't doing anything that will get us any closer to that better place. The short-term drivers push everyone toward closed, walled gardens fueled by adtech. But blaming companies and short-term pressures is too convenient. People run companies. People work at companies. And people pursue short-term goals all the while hoping this better world will somehow magically emerge. It won't. Not unless we build it. We have to build it.

If you work in tech, you have an ethical responsibility to build the world you want to live in. Simple as that.