V2V systems will soon be sending all kinds of information about your car to other cars and highway infrastructure. This raises legitimate privacy concerns as well as intriguing possibilities. 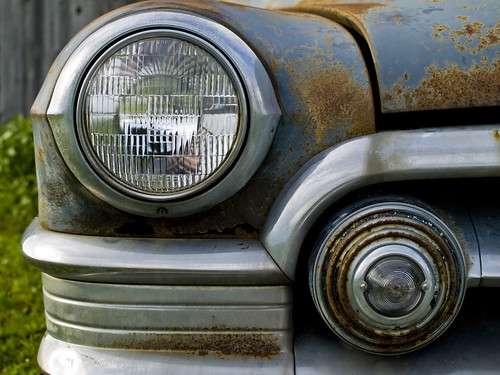 On Feb 3, a Federal District judge issued an injunction (PDF) that said the First Amendment gives people the right to communicate on the road. The ruling was in response to a lawsuit against the city of Ellisville, MO for an ordinance that forbid motorists to flash their lights at each other. The city was in the habit of handing out $1000 fines for light flashing. (Reason.com article)

The same day I saw that, I also read Government Wants Cars To Talk To Each Other in Time regarding the Dept. of Transportation's V2V or vehicle-to-vehicle initiatives:

The government agency estimates that vehicle-to-vehicle (v2v) communication could prevent up to 80 percent of accidents that don’t involve drunk drivers or mechanical failure.

The DoT proposal would require all car manufacturers to install v2v communications in cars and other light vehicles. The systems typically feature transponders able to communicate a car’s location, direction and speed at up to 10 times per second to other cars surrounding it, using a dedicated radio spectrum similar to WiFi. The vehicle would then alert its driver to a potential collision. Some systems could automatically slow the car down to avoid an accident.

Instead, the government could use such systems to spy on you or even restrict how and where you drive. There's nothing that would keep such a system from forcing a vehicle to drive the speed limit. Or keep it from entering certain areas. You car simply wouldn't go if you tried to take it somewhere the government hadn't authorized. Of course, the DoT and others will tout the safety benefits, but there are also significant opportunities for the Nanny State to repress or, worse, the Surveillance State to spy. The car, long a symbol of freedom, would become a mere means of getting from point A to point B, so long as point B is in the list of authorized destinations for you.

While such DoT-mandated V2V are likely inevitable, we can work to ensure the protect driver privacy and restrict their use to curtail freedom of movement. There's also nothing to prevent us from creating our own V2V systems that send the messages we want to send. Our goal with Fuse is to give your vehicle a voice that speaks to and for you. You control what your vehicle says and who is says it to. No reason it couldn't be speaking to other cars. Think of it like CB radio for the 21st century.