Shon Shah asked about the relationship between Fuse, Kynetx, and Carvoyant on the Fuse Forum. This blog post answers his questions.

Fuse, the open-source connected-car platform I'm working on is stack of technologies that ultimately provide the total user experience. Here's one way to look at that stack:

From bottom to top, the components of the stack are:

Note that the mobile app is just one of many applications that might make use of the Fuse API. For example, as shown in this diagram, not only does the mobile app use the API, but so does the Fuse Management Console and the iCal feed. 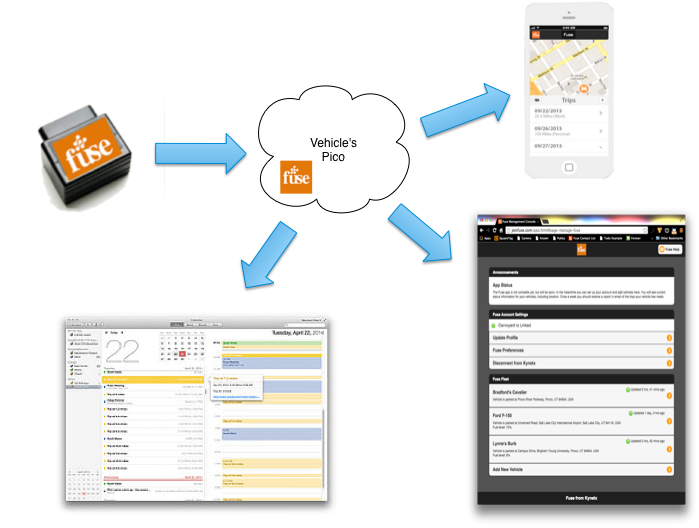 Picos are modeling device that have significant advantages for connected things:

The Fuse API differs from the Carvoyant API in several significant ways:

The link to Carvoyant in the Fuse Management Console (OAuth) has provided some angst for people do to the need to create a Fuse (Kynetx) account and then to also create and link-in a Carvoyant account. Indeed this has been the source of 90% of the support issues I deal with. In theory, it's no different than linking you Pocket account to Facebook and Twitter so that you can share things you read with Pocket. In practice it's hard for people to understand with for a few reasons:

If Fuse supported more than just Carvoyant devices and you linked in multiple device accounts and if people used Carvoyant with more than one app, this might be clearer. But that's not reality right now, so we live with the model even though it seems somewhat forced.

The same is true of the Fuse (Kynetx) account. For simplicity, I refer to it as a Fuse account and the branding on the account interaction is Fuse, but if you pay attention, you're actually going to Kynetx to create the account. That's because you're really creating a hosting account for your picos on the Kynetx instance of KRE. Fuse itself really has no notion of an account. The Kynetx account is used to associate you with the owner pico that belongs to you, but that's all. Other mechanisms could be used to do that as well. You could run applications other than Fuse in that Kynetx account (and I do).

You're probably saying "this is more complicated than it has to be." And that's true if your goal is just to create a connected-car app like Automatic. My goal has always been a little larger than that: using Fuse as a means to explore how a larger, more owner-controlled Internet of Things experience could be supported. All this, or something similar, is necessary to create an owner-controlled Internet of Things experience.