Life Will Find a Way

An old apricot tree reminded me that life is wonderfully decentralized, helping it succeed in harsh conditions. 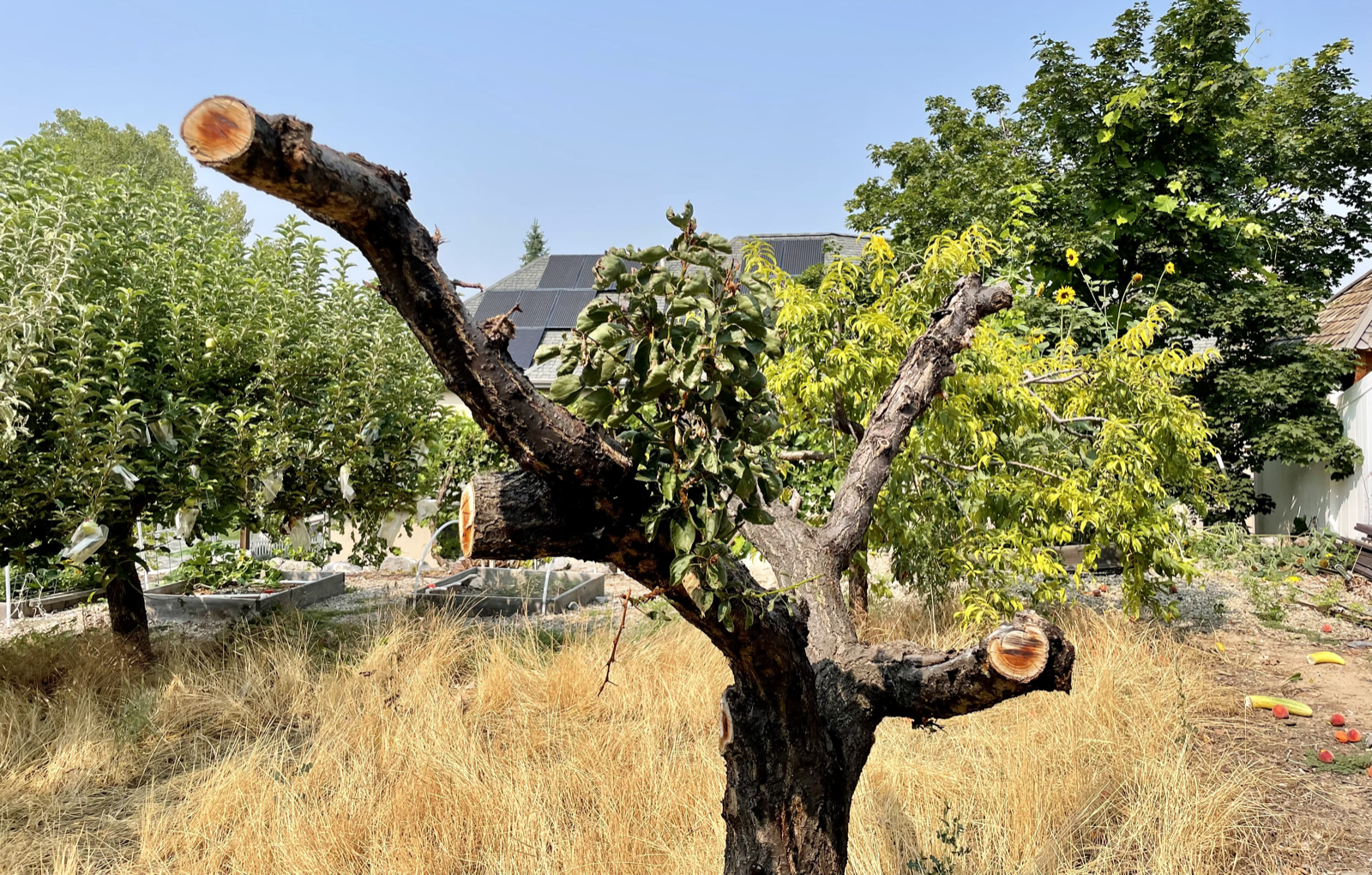 Last summer, I decided to kill this apricot tree. We weren't using the apricots, it was making a mess, and I wanted to do something else with the spot it's in. So, I cut off the branches, drilled holes in the stumps, and poured undiluted Round-Up into them. And yet, you'll notice that there's a spot on one branch that has sprouted shoots and leaves this summer.

My first thought was that the tree was struggling to live. But then, I realized that I was anthropomorphizing it. In fact, the tree has no higher brain function, it's not struggling to do anything. Instead, what the picture shows is the miracle of decentralization.

Despite my overall success in killing the tree, some cells didn't get the message. They were able to source water and oxygen to grow. They didn't need permission or direction from central authority. They don't even know or care that they're part of a tree. The cells are programmed to behave in specific ways and conditions were such that the cells on that part of the branch were able to execute their programming. Left alone, they might even produce fruit and manage to reproduce. Amazing resiliance.

I've written before about the decentralized behavior of bees. Like the apricot tree, there is no higher brain function in a bee hive. Each bee goes about its work according to its programming. And yet, the result is a marvelously complex living organism (the hive) that is made up of tens of thousands of individual bees, each doing their own thing, but in a way that behaves consistently, reaches consensus about complex tasks, and achieves important goals.

A few years ago, I read The Vital Question by Nick Lane. The book is a fascinating read about the way energy plays a vital role in how life develops and indeed how evolution progresses. I'm still in awe of the mechanisms necessary to provide energy for even a single-celled organism, let alone something as complex as a human being, a bee hive, or even an apricot tree.

Life succeeds because it's terrifically decentralized. I find that miraculous. Humans have a tough time thinking about decentralized systems and designing them in ways that succeed. The current work in blockchains and interest in decentralization gives me hope that we'll design more systems that use decentralized methods to achieve their ends. The result will be an online world that is less fragile, perhaps even anti-fragile, than what we have now.

The Vital Question: Energy, Evolution, and the Origins of Complex Life by Nick Lane

For two and a half billion years, from the very origins of life, single-celled organisms such as bacteria evolved without changing their basic form. Then, on just one occasion in four billion years, they made the jump to complexity. All complex life, from mushrooms to man, shares puzzling features, such as sex, which are unknown in bacteria. How and why did this radical transformation happen? The answer, Lane argues, lies in energy: all life on Earth lives off a voltage with the strength of a lightning bolt. Building on the pillars of evolutionary theory, Lane’s hypothesis draws on cutting-edge research into the link between energy and cell biology, in order to deliver a compelling account of evolution from the very origins of life to the emergence of multicellular organisms, while offering deep insights into our own lives and deaths.