Sovrin's verifiable claims provide the means of creating a virtual university with little or no traditional integration between the various players. 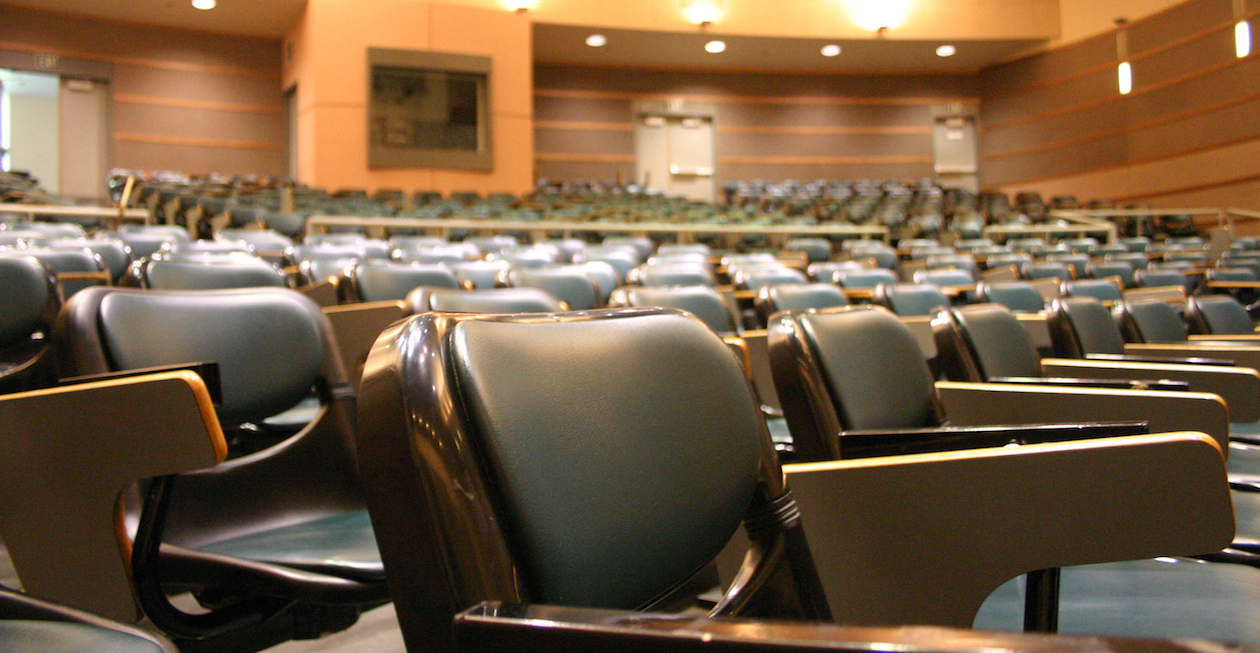 Lately, I’ve been thinking a lot about use cases for self-sovereign identity. This series of blog posts discusses how Sovrin can be used in different industries. In this article I discuss Sovrin and education.

Last spring I wrote about how deconstructing the student information system at BYU is allowing us to create a virtual university. The idea is to create a decentralized system of student profiles that contain both profile data as well as learning records. These learning records can attest to any kind of learning activity from the student having read a few paragraphs to the completion of her degree. By making the student the point of integration, we avoid having to do heavy, expensive point-to-point integrations between all the student information systems participating in the educational initiative. 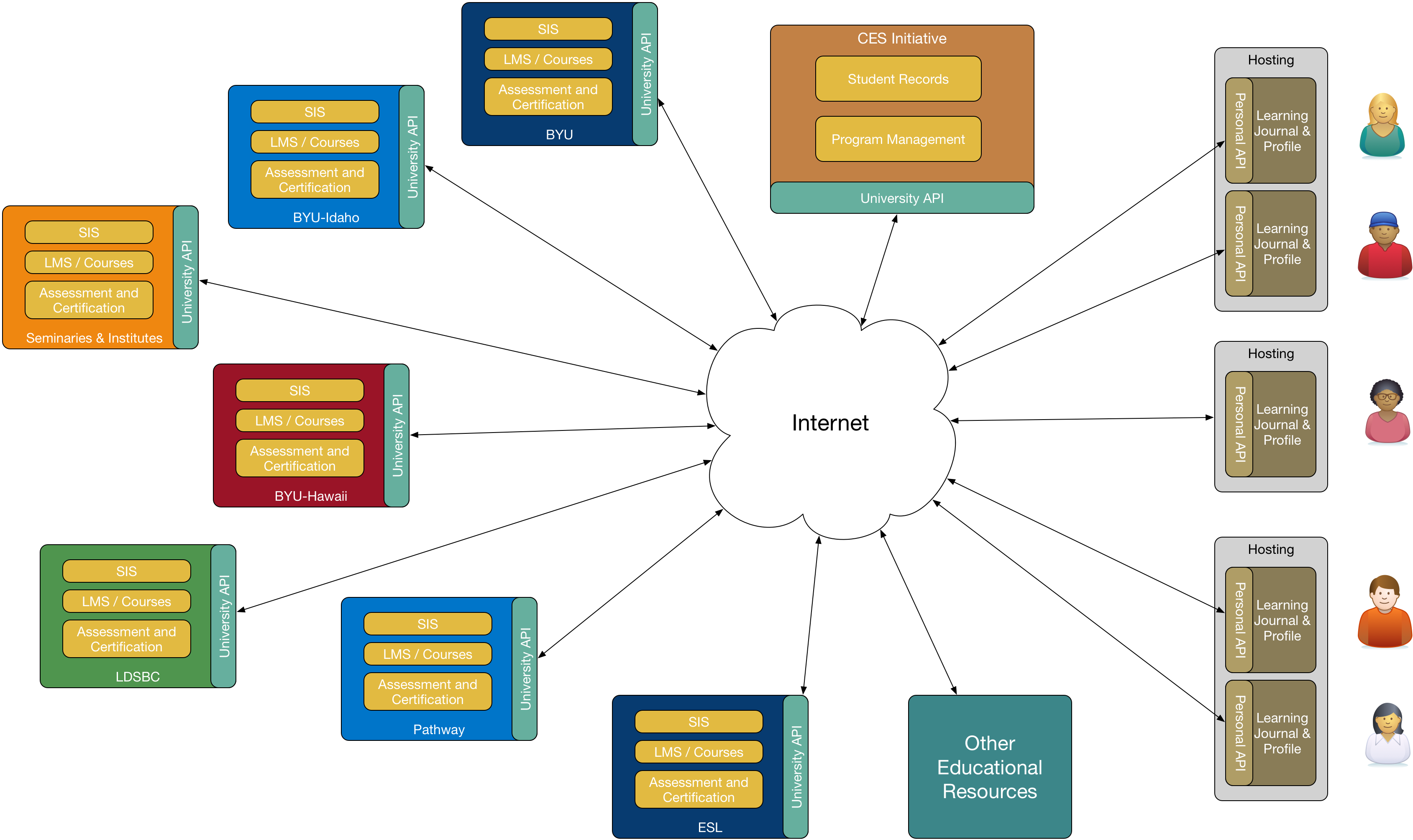 This diagram shows a number of players in the virtual university (VU) system (labeled CES Initiative). They have no direct connections to each other, but present their own APIs, as does the student profile. As students interact with the various institutions, they present data in their profile (using an API). That's the only point of integration for these institutions, including VU itself.

One of the design requirements for the student profile is that it be hostable where ever the student desires. We also put the student in control of authorizations to use data. These features mitigate regulatory requirements around privacy of student data. With millions of potential student spread among 188 different countries, this saves significant cost and headache trying to meet various regulatory hurdles. When the student is an active participant in sharing their data, the hurdles can be more easily overcome.

The Role of Self-Sovereign Identity

Self-sovereign identity can simplify many of the most difficult challenges of building the student profile. One of the key features of Sovrin is support for verifiable claims shared by their subject. Nearly everything in the student profile looks like a verifiable claim. Sovrin provides the infrastructure for issuing claims and using them in disclosures. Sovrin enables the receiver of the disclosure to verifying the claims in it.

Verifiable claims also significantly ease the integration burden between the various systems involved in the virtual university. Say Alice wants to be a book keeper, but the book keeping microcourse has requirements for English language proficiency and secondary school completion, that she lacks. There could be four institutions involved in this scenario: Virtual University (VU), the English language certifier (ELC), the secondary education provider (SEP), and the college offering book keeping (BK). These last three institutions all have agreements with VU, but no technical integration with VU or each other.

Alice has be admitted to VU and paid for the book keeping microcourse along with the require pre-requisites.1 She goes to ELC. Alice can prove she's a VU student and has paid for the English language certification by disclosing that information from the verifiable claims that VU wrote to her student profile. ELC can validate that the disclosure is true without talking VU directly. Alice registers for a course and, after she completes it, ELC writes a claim that she passed to her student profile.

Alice, guided by the Student Profile, heads to SEP and discloses that she's a VU student. SEP validates her student status and that she's paid for the SEP program. They ask her to prove that she has the required level of english competancy and she provides a disclosure based on the claim that ELC wrote. She completes the secondary education program and SEP writes a claim stating such.2

The same thing happens for Alice's book keeping course at BK. One notable difference is that the microcourse that Alice signed up for might be made up of courses offered at different univerisities. You might be shocked to know that even in 2016, transcripts are still largely shared on PDF, or even fax, and processed using teams of people that transcribe them. Verifiable claims provide a solution to this problem that is decentralized, open, standards-based, and non-proprietary. Because the claims are anchored in the Sovrin ledger, they can be hosted anywhere in the world and still be usable by any participant in the system.

Alice may have the option of choosing the take the same course from several institutions. Alice can share her current status with VU and they can give her recommendations based on the possibilities. Alice can go to any available institution. They simply read disclosures she's created about the past courses she's taken to ensure that the meets the pre-requisites and write claims each time she completes a course. Once all the courses are complete, VU issues a claim for the book keeping certificate that Alice can use when she applies for jobs or if she decides to talk additional courses.

One of the interesting factors of Virtual University is that many participants will be subject to different legal jurisdictions. Trust frameworks can be built on Sovrin to ensure that they can trust each other regardless. For example, Sovrin's built-in system of consent receipts allows a student's consent regarding data use to be recorded and notarized by a system outside the University. So long as Sovrin can be trusted to record and notarize these consent receipts properly, they can be trusted by participants regardless of where they reside.

The preceding case study was a little vague about where things are stored, merely talking about "writing claims" and "creating disclosures." As a rule, it's not a good idea to write claims, disclosures, and other data directly to the Sovrin ledger. Instead, these are generally written to some kind of data store and then anchored in the ledger by writing a signature of the data on the ledger. The student profile and learning record store functions as a Sovrin Agent. Agents are Sovrin-enabled systems that store and process information on their owner's behalf.

As education is increasingly deconstructed, a trustworthy system for issuing and relying on verifiable claims and consent receipt enables decentralized, interoperable education ecosystems. Sovrin significantly decreases the number of heavy integrations necessary to realize the virtual university. Universities exist, to some degree, because they are trustworthy issuers of credentials. Sovrin provides a foundation for extending that trust outside these traditional institutions.